Santa Fe Tex-Mex Grill, one of the pioneers of Tex-Mex cuisine in Singapore, celebrates the launch of its 7th edition ala-carte menu this labour day long weekend, with special offers, games, and a Tex-Mex Marketplace cookout. 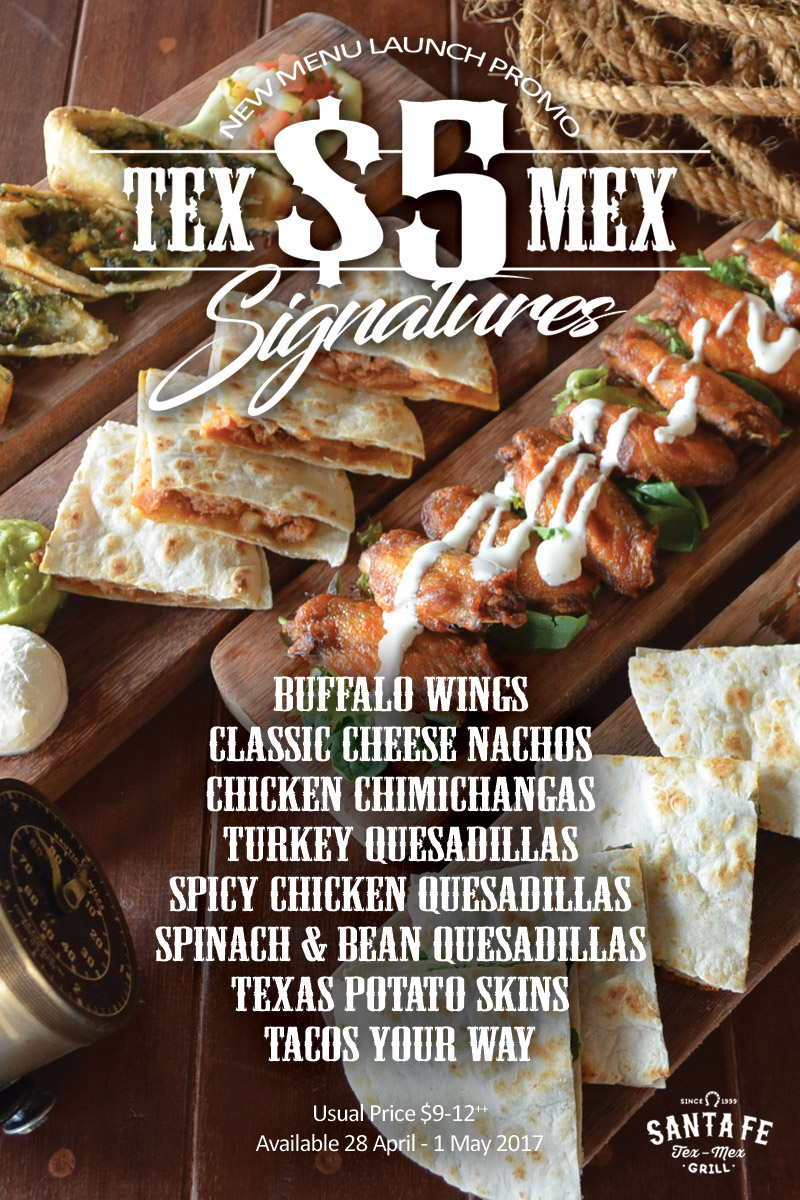 Try as many of Santa Fe’s Tex-Mex Signatures as you can for just $5++ each, prepared by our chefs right before your eyes at our Tex-Mex Marketplace! There will also be limited $5++ sampler portions of Baby Back Ribs, Fajitas etc going around at various times of the day.

Of course, what’s a Tex-Mex meal without a refreshing glass of Frozen Margarita! Get high with our signature Frozen Margaritas (Original/Strawberry/Mango) and House Sangria going at $10++ a glass! 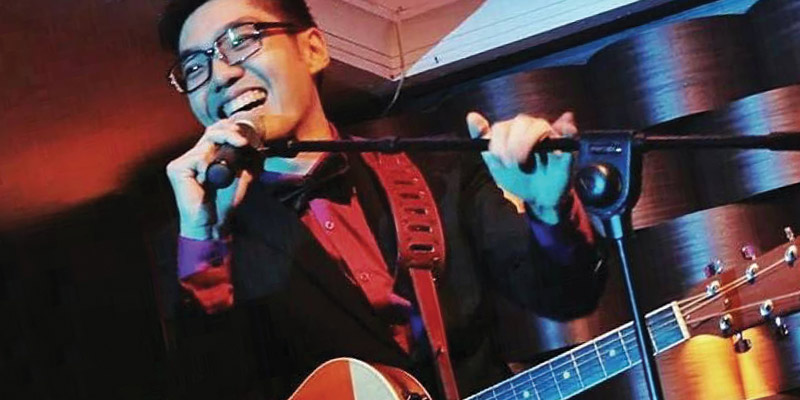 Come sundown, leave your inhibitions at the door and join in the fun as emcee Jonavan Lee brings you to exciting food games, drinking challenges, and an Achy Breaky Heart dance-off. Attractive prizes to be won!

What’s New in the Menu?

Ever since the opening of the first Santa Fe outlet in Boat Quay back in a day when Tex-Mex cuisine was relatively unheard of in Singapore, the homegrown family restaurant has been well-loved for its authentic Texan-Mexican fare like chimichangas, quesadillas, nachos, tacos and fajitas, as well as American favourites like steaks and ribs.

Now in it’s 18th year running, the restaurant has ‘come of age’ so to speak, and under the leadership of acting head chef Lilian and executive sous chef Benjamin, we have given the menu a modern, trendy, somewhat ‘hipster’ overhaul, whilst maintaining the authenticity of its cuisine.

If you’ve dined at Santa Fe before, chances are you were recommended our signature Turkey Quesadillas. Now, you have two other versions to choose from: Spicy Chicken Quesadillas with chunky slices of grilled chicken packed between flour tortillas and oozing with melted cheese, and a healthy and delicious Spinach & Black Bean Quesadillas. 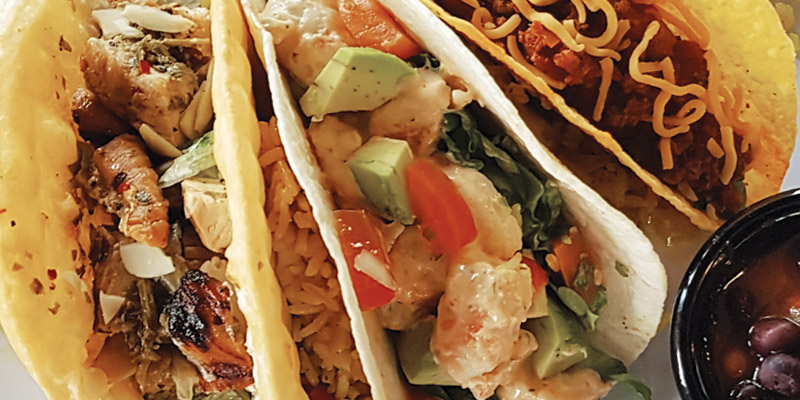 The entire Taco section of our menu has been given a lively revamp. You can now choose from soft shell (flour tortillas), hard shell (crispy corn tortillas), or puffy shell (deep-fried puffed-up flour tortillas) to hold your fillings. Try our new Avocado Prawn Tacos, Fisherman’s Catch Tacos and Chimichurri Chicken Tacos, or go for the all-time favourite Chili-Beef Tacos. 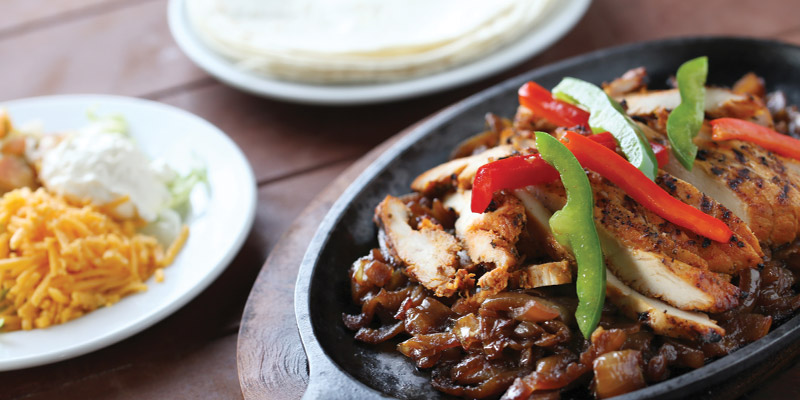 Not exactly new, but definitely refreshed and enlivened with an exciting mix of popular Tex-Mex spices. Try the revamped classics Chicken or Beef Fajitas, served sizzling on a cast-iron skillet with onions and bell peppers, and with flour tortillas to wrap.

Joining the range of juicy, meaty burgers on our menu is the new Tex-Mex Avocado Burger, featuring a large ‘American-sized’ spiced beef patty covered with melted cheese, and topped with avocado cubes and pico de gallo. Other must-try’s include is Chef Ben’s favourite Pulled Pork Burger and the reintroduction of our popular American-style Philly Beef Steak Sandwich.

The entire new menu will be unveiled online at www.riverboat.com.sg/santafe on 28 April.

For anyone less familiar with the term Tex-Mex, the term actually identifies an Americanization of Mexican food. The trend started in the mid 20th century among the Tejanos (Texans of Mexican or Spanish heritage) and Mexican immigrants, and was officially recognized as a cuisine of its own in the 1970’s, distinct from traditional Mexican cuisine. Tex-Mex cooking has a strong reliance on traditional Mexican ingredients, as well as a distinct American influence. Modern and trendy, it has been described as being as bright and colourful as sunny Texas and Mexico.

Santa Fe Through the Years

Santa Fe Tex-Mex Grill was born in a 3-unit, 2-storey shophouse along Singapore River back in 1999, out of a simple conversation where an American friend of local businessman Eric Saw suggested, “Why not do Tex-Mex?” We did research, engaged consultants, got a team together, opened for business, and 18 years on we have never once regretted taking on this unique and exciting cuisine.

In 2001, Santa Fe’s new flagship outlet opened on board Stewords Riverboat. The Riverboat was then moored at Sentosa, and later relocated to Marina South Pier where it operates till this day.